In 1936, the Catholic Bishop of Portsmouth, prompted by local clergy and laity, invited the Jesuit Order to establish a Catholic Boy’s Grammar School to serve Bournemouth, Christchurch and the surrounding areas. In response, the Jesuit Superior sent a former Headmaster of Stoneyhurst College, Father L E Bellanti SJ, to scour Bournemouth for a suitable site. Through a chance conversation he discovered that a delightful property in St Catherine’s Road, Southbourne, was about to be vacated by a school for girls, then known as ‘Grassendale’, thereafter, to be called ‘St Mary’s Gate’. Grassendale was also the name given to 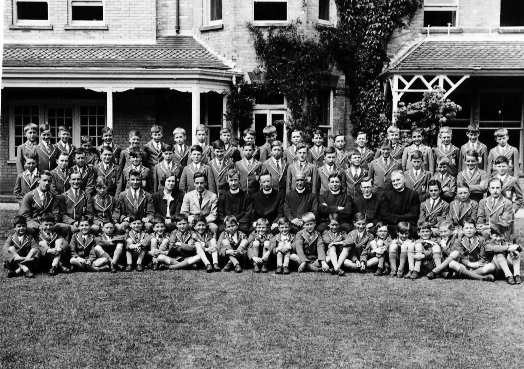 the large house on the property that is now the administrative wing of St Peter’s. It is one of the oldest buildings in Southbourne and had been owned by Dr T A Compton, the founder of ‘Southbourne’ and the originator of its name. A new school for boys was duly opened on the site by the Jesuits in September 1936.

It was named ‘St Peter’s’ and given a badge comprising the Cross Keys of St Peter the Apostle and the motto ‘In Verbo Tuo’; (later, the Brothers added the Star; the Sign of Faith). The school roll on the first day was 34 boys, of whom six were boarders. By 1947, in view of increased commitments elsewhere, the Jesuits had decided to with-draw and arrangements were made to hand over the School to the De La Salle Brothers. The Brothers began a long period of development for St Peter’s as a day and boarding school for boys. At the same time Bournemouth itself was expanding rapidly and with it the Catholic population of the area. The need for more accommodation in Catholic Schools became crucial and, in 1963 the Diocese of Portsmouth responded by opening a new Catholic Secondary School for Boys and Girls to complement St Peter’s and Boscombe Convent. It was called ‘St Thomas More’s’ and was established on a fine site with brand new buildings in Holdenhurst Avenue.

The Catholic Community was blessed with excellent schools that, together, provided the full range of Catholic Secondary Education for boys and girls. From 1965 onwards the re‐organisation of secondary education on comprehensive lines became the subject of much discussion. And finally, in 1977, after a long period of consultation, the Diocese of Portsmouth concluded that the future of Catholic secondary education in the area, up to the age of 18, could only be guaranteed through the merger of all three Schools. This aim was realised in 1980 with the establishment of a new Comprehensive School, centred on the site of St Peter’s with St Thomas More’s forming the Lower School. The name ‘St Peter’s’ was chosen for the new School and with it the St Peter’s badge.