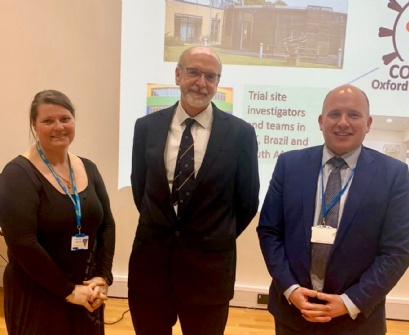 This week we were very honoured to welcome back to St Peter's, Professor Sir Andrew Pollard.

Sir Andrew is a Professor of Paediatric Infection and Immunity at the University of Oxford and an Honorary Consultant Paediatrician at John Radcliffe Hospital.  He is probably most well known in recent years as the Director of the Oxford Vaccine Group and he also the Chief Investigator on the Oxford COVID-19 Vaccine trials and has led research on vaccines for many life-threatening infectious diseases OTHER than Covid, including typhoid fever, Meningitis, Flu, Pneumonia, Rabies and Ebola. Sir Andrew not only attended St Peter’s but was in fact head boy here in 1982 – anybody passing through Reception will be able to spot his name on our Head Boy/Head Girl roll.

Having driven all the way down from Oxford to visit us, and wearing his school tie, Sir Andrew had a tour of the school, especially the new buildings. He shared some of his memories of PE lessons on our fields and in our older buildings, and he was most impressed with the new B block, especially as he knows Brother Bernard well (after whom that building is named). After a quick refreshment, Sir Andrew began to greet our audience members. It was absolutely heart-warming to see several of his old school friends and even some of his teachers, including Mr Hook, who taught him PE and Dr Hartley, who taught him Chemistry.

Sir Andrew’s lecture was absolutely fascinating as it related so much that has never been shared in the media, he gave us his view on the potential for future pandemics and vaccination development, as well as a short history of pandemics in general. More than ever, we realised how fortunate we are to have people like Sir Andrew and his team working so hard to develop medicines and treatments that have literally saved millions of lives around the world. His ethical stance on developing a vaccine, that is not-for-profit and lobbying for the distribution of that vaccine to poorer countries and not just richer nations, was very humbling. The audience asked many questions showing just how interesting Sir Andrew’s lecture was to all and how accessible he made a very complex subject.

I cannot thank Sir Andrew enough for coming to talk to us. It was a privilege to be in the company of a man with such knowledge and experience in a field which has personally affected so many of us in recent years.